The May 2018 rare book of the month is Euclid’s Elementorum libri XV, printed in Cologne in 1607. As can be seen above and on the right, the book’s title page was signed by Robert Ashley (‘Ro. Asheley’), using a variant spelling of his surname; his initials R.A. are also 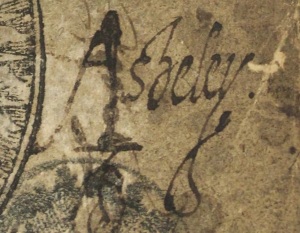 written on the title page. According to The Oxford Dictionary of the Renaissance, “Euclid’s Elements provided the basis for all teaching in learned mathematics”. Ashley was briefly a public professor of geometry in Oxford during 1587/1588 (https://archive.org/stream/aregistermember03oxfogoog#page/n114/mode/2up) and developed a substantial collection of mathematical books during his lifetime. His collection contains three editions of Euclid’s Elements– two from 1607 and one from 1609.

The first printed version of the Elements was produced in Venice in 1482 by Erhardus Ratdolt, and was in Latin. The first Latin edition produced from a Greek translation was printed in 1505 by Joannes Tacuinus- this edition showed that “books 14 and 15, long accepted as part of the Elements, were not in fact by Euclid” (ODR).

The 1607 version of the Elements featured here contains an extra book- number 16, added by François de Foix, comte de Candale. According to Benjamin Wardhaugh, book 16 “was concerned primarily to expand upon the final few constructions of Book 15: in particular the sometimes complex and beautiful figures which resulted when one regular polyhedron was placed inside another” (https://www.thinking3d.ac.uk/Candale1566/). Foix also included a “short treatise on regular and semi-regular polyhedra”.

As can be seen below and on the verso page above, Robert Ashley has marked up the book with a variety of annotations concerning the work itself, mentioning the importance of mathematics to understanding the motion of the stars and planets. Ashley has marked up the 1609 edition in a similar fashion, referencing Philipp Melanchthon. [With thanks to Dr. Jon Blaserak of the University of Bristol for assisting with this marginalia].

This book was chosen as the May 2018 book of the month as Middle Temple Library will be participating in the ‘Seeing Euclid’ project organised by the History Faculty of the University of Oxford. As part of this project, organisations around the UK are exhibiting their 15th-18th century copies of Euclid’s Elements between 19 May and 15 July. A dedicated website will be launched on 19 May: www.seeingeuclid.org. Middle Temple’s Euclid books will be on display from 18 May to 15 June in an exhibition case on the Gallery, facing the Molyneux Globes.

The book is heavily damaged, with the title page in a particularly delicate state. It was rebound in the 1970s, but without any paper repairs being performed, meaning that the paper has become particularly dirty and damaged. If you would like to sponsor the repair of this work for an estimated cost of £300, please get in touch with the Librarian: library@middletemple.org.uk.